Their whimsical creations are guaranteed to brighten up your home. 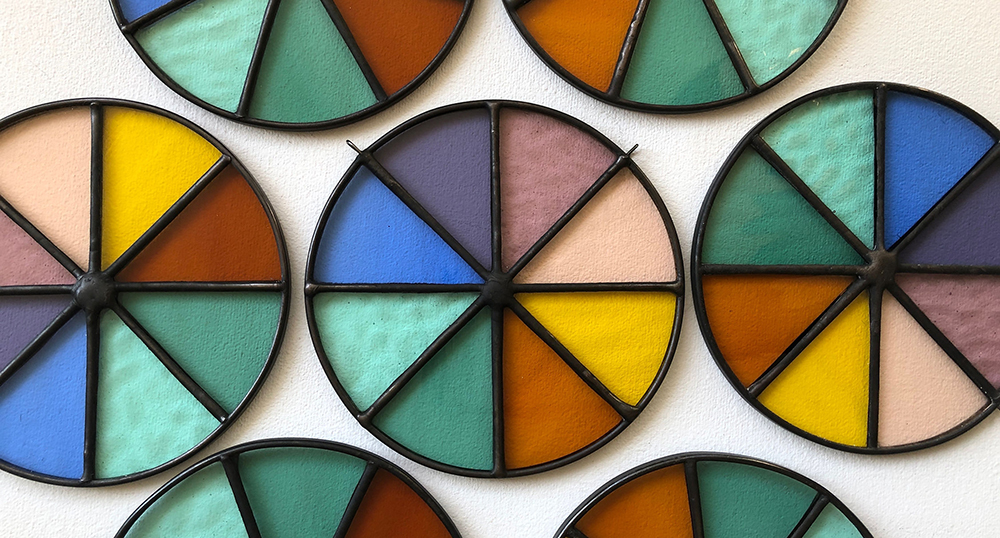 Known for its beauty and ability to be used as a means of visual storytelling, stained glass certainly has a fabled history. According to the Stained Glass Association of America, its origin stretches back thousands of years to the use of coloured glass appearing in Egyptian artisanal work dating between 2750 and 2625 BC.

Ancient Romans were said to set glazed glass into windows, revealing one of the most commonly known applications of the artistic practice; one of the oldest examples of multi-coloured glass being used in this fashion was discovered at St. Paul’s Monastery—founded in 686 AD—in Jarrow, England.

But the boundless beauty of stained glass couldn’t be confined to religious applications alone. At the end of the 19th century, Tiffany Studios, founded by Louis Comfort Tiffany (son of Tiffany & Co. founder Charles Lewis Tiffany), used a copper foil technique—as opposed to the leaded one that people had used for centuries, which is more appropriate for exterior use—to introduce a stained glass-effect to home decor products; most famously, lamps.

Today, it’s not only architectural wonders from cathedrals or mosques, or ultra-expensive antiques that entice us with vibrant, light-catching stained glass motifs. In fact, there’s a host of local artists producing smile-inducing stained glass objects that are a fit for any space, no matter the style.

“What we are looking at is how the new generation of artisans is taking old trades and an old way of doing [something], but transforming it into more modern pieces,” says Cécile Branco, director of Fabrique 1840, the Canadian maker-focused department of Quebec retailer Simons, whose offering includes pieces by New Brunswick-based La Vie En Verre.

The allure of stained glass and its ability to capture modern moods has not only influenced makers to contemporize the craft, but also, in turn, to teach others. Nejla Yakub, who launched the Toronto-based brand Yaba Home & Decor in 2017, was motivated to try her hand at creating stained glass pieces because of her in-laws’ experience creating it.

“I was working a corporate job,” Yakub says, but as she learned the method for making stained glass from her family, she became totally enamoured with the process and potential outcomes. “I immediately wanted it to be something that was full time.”

Yakub now teaches stained glass workshops in intimate groups. “I’ll get Instagram messages with photos of my students’ pieces,” she says. “It’s such a fulfilling feeling.”

Looking to add a little luminosity to your life right now? Read on to discover five Canadian stained glass makers whose creations are guaranteed to brighten up your home. 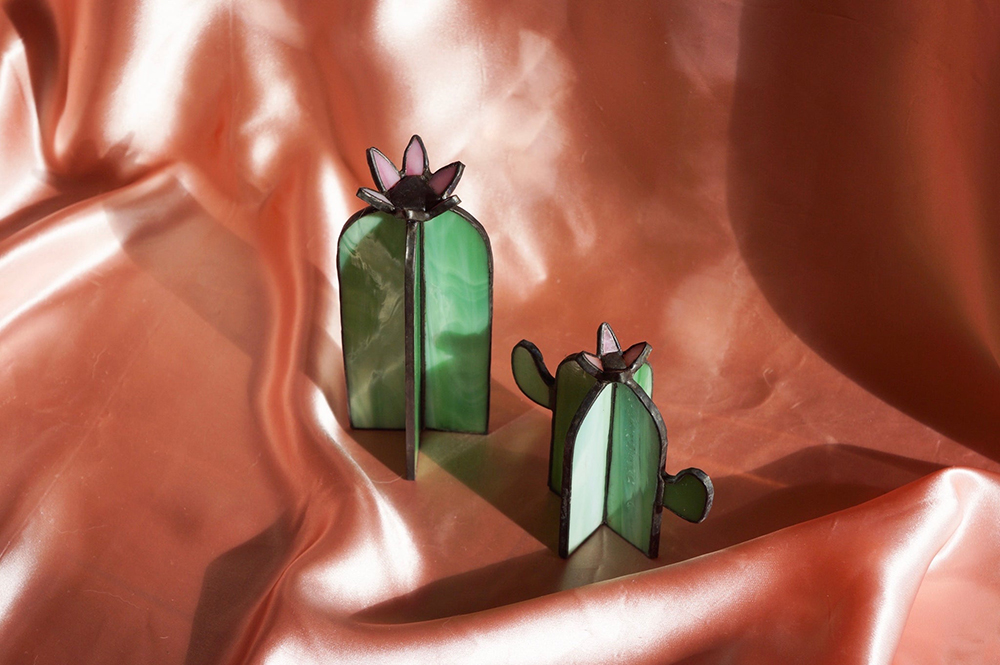 Toronto-based Nejla Yakub’s signature style is a swell of shimmering shapes—from organic to asymmetrical—found on mirrors, plant holders and hanging objects that capture the imagination as well as the light.

Inspired by the glamour of Art Deco silhouettes and the joyfulness of the quirky catalogue of the iconic 1980s Memphis Group, Yakub has honed her own aesthetic for the medium as well as her own way of creating stained glass by merging the Tiffany method with a finishing process she developed through much trial and error. Her copper foiling technique allows for more “organic” shapes to be crafted.

“It took me quite some time, but I was able to get it where I wanted it,” she says. “I am very proud of that, because I feel like I’m able to define myself and my art and not only be a stained glass artist, but an artist that’s able to use multimedia to create pieces.” 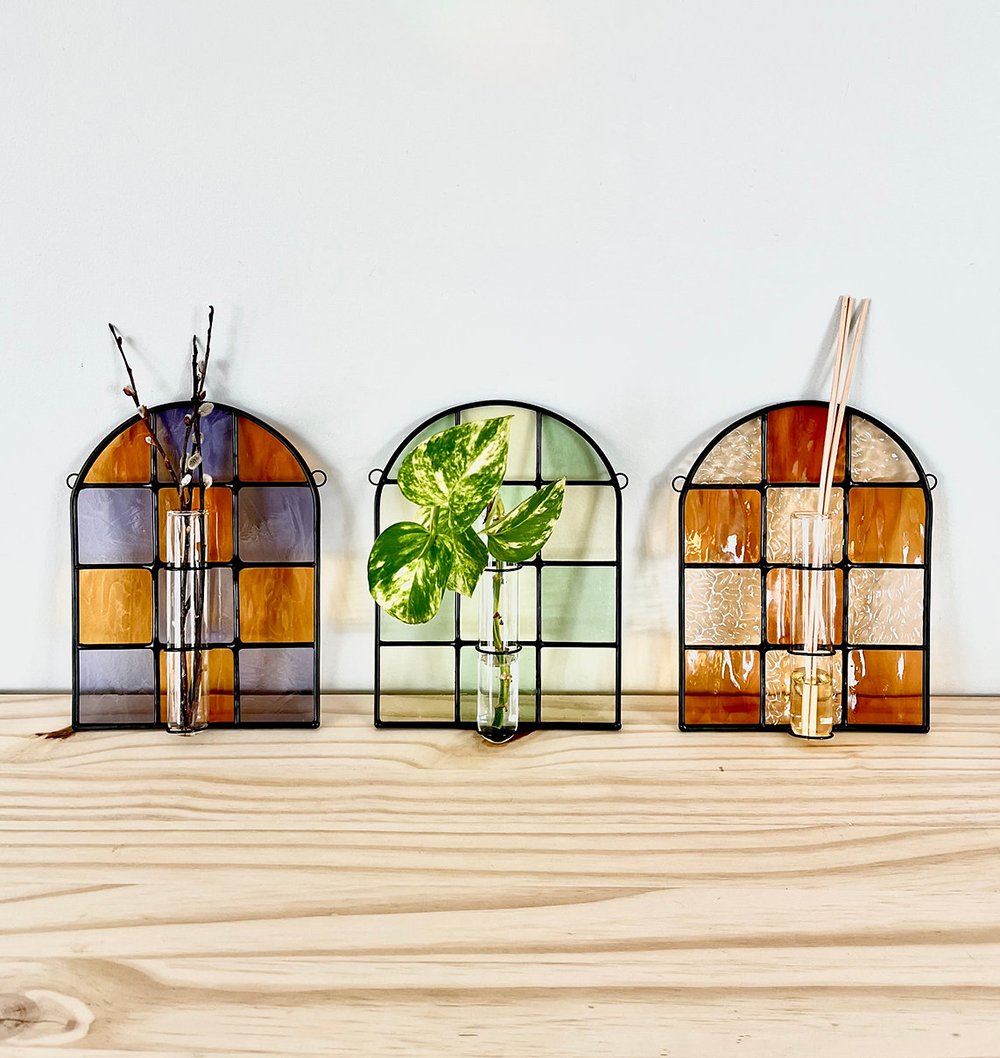 New Brunswick-based brand La Vie En Verre was founded by Stéphanie Couturier, whose signature stained-glass style highlights the use of of-the-moment geometric shapes (hello, checkerboard!) and hues from soft pastels to bold oranges and yellows, applying them to items like plant propagation stations, mobiles and other objets of interest. 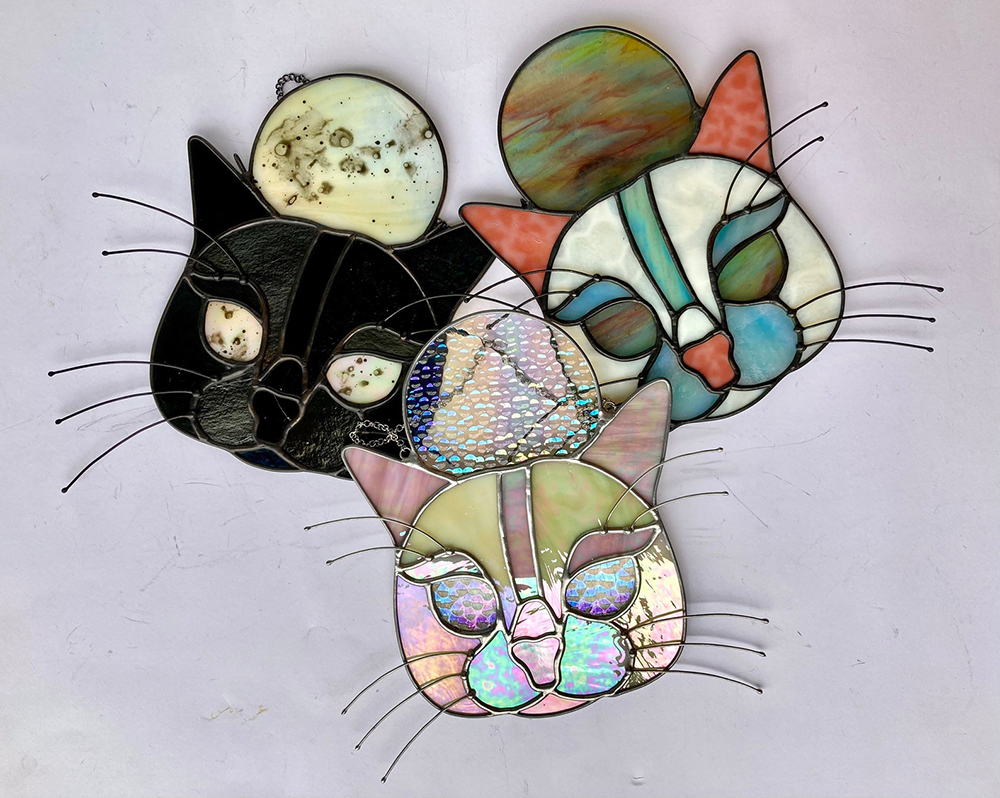 Isabelle Raymond dove into stained glass during the pandemic, and became a full-time artist using the medium in the fall of 2020 (she also teaches classes at a studio in Old Montreal). The motto of her business is “stained glass with a story to tell,” and she counts the moon and her cat Ali as muses for her vibe-y work. 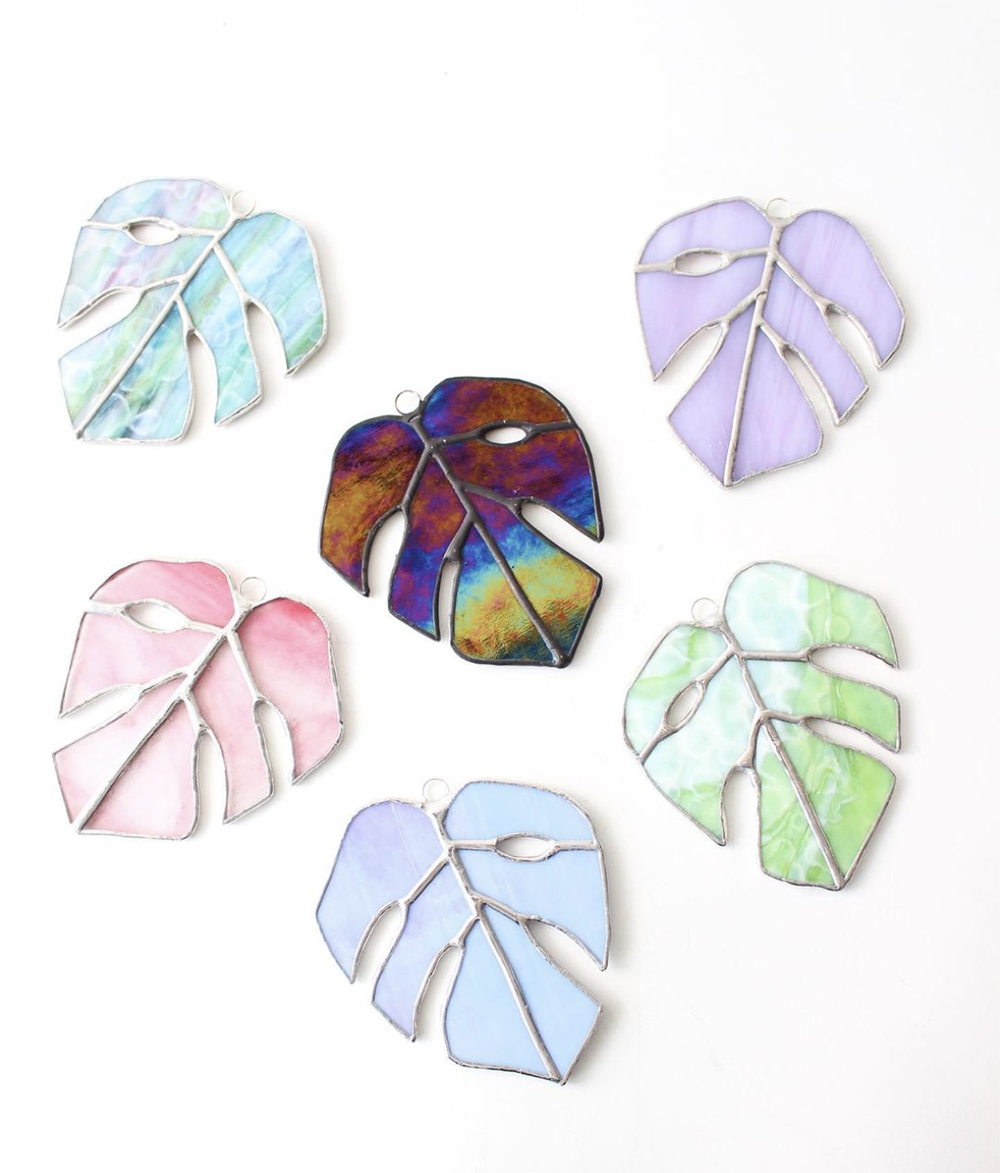 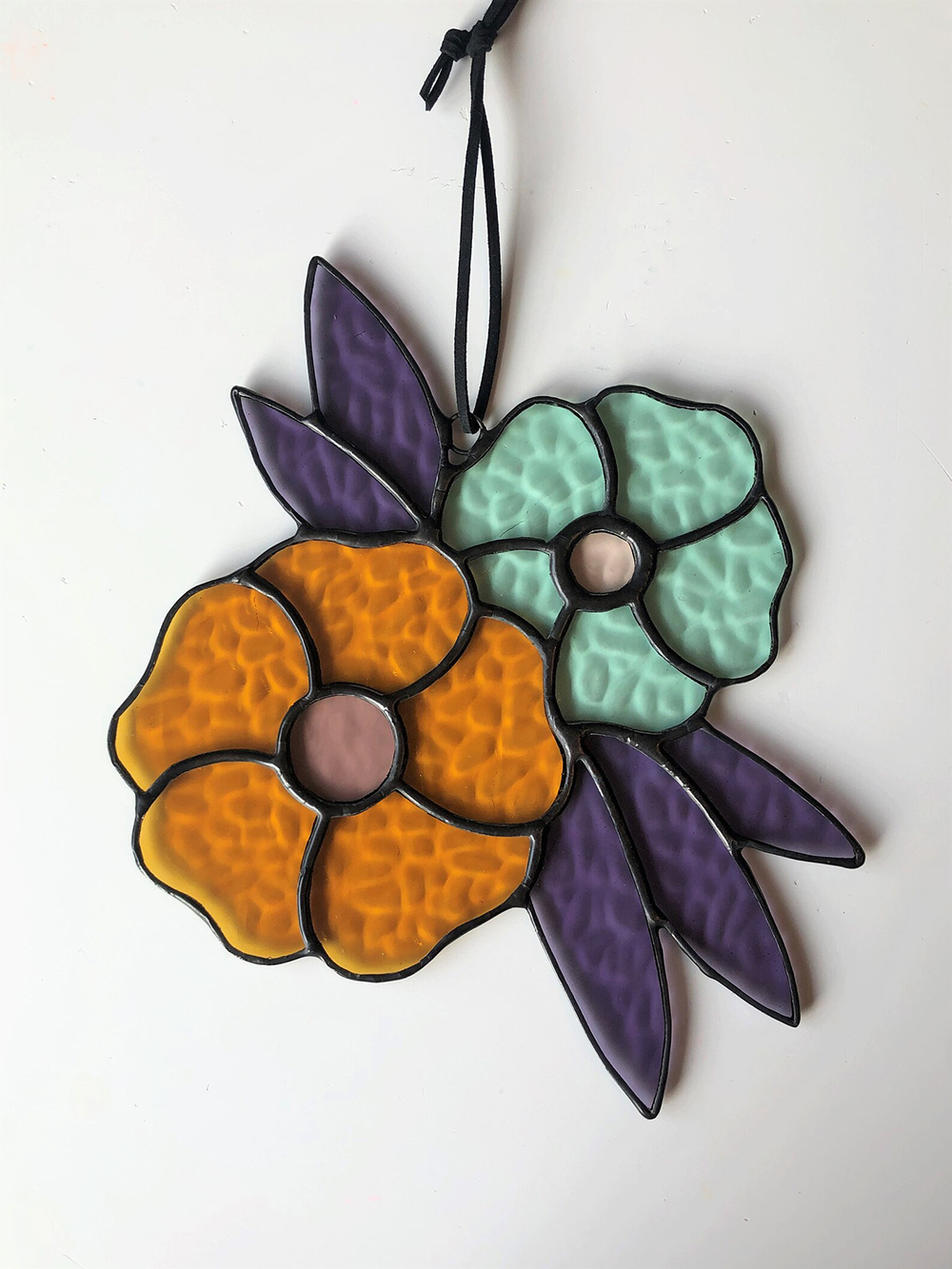 (Photo: Courtesy of Copper and Came)

Flora and fauna influence Vancouver glass artisan Michelle Theobald’s creations, which feature groovy fused glass, an intriguing technique in which layers of glass of different colours and textures are heated together in a kiln.